Grandola, Portugal is both a town and municipality in the district of Setubal with a total area of three hundred and twelve square miles and a population of approximately fifteen thousand inhabitants. The municipality is composed of the following five parishes:

Grandola traces her history from the Bronze Age through Roman occupation up until modern day times and was an important outpost for the Roman Empire which included large scale fish salting and preservation complexes. Parts of these ruins can still be seen today which include spas, bathrooms, salting tanks, a cemetery and remnants of a basilica with its Paleo-Christian frescoes.

XVI Century:      The Kingdom of Grandola had a population of forty five inhabitants, with an additional two hundred occupying the surrounding countryside and was given a Town Charter at the request of the Duke of Coimbra by King Joao III. This Charter was successful in contributing to the growth and development at that time of this somewhat small scale settlement.

XVII Century:    A communal wheat granary was established in order to support and feed the local population which included many of the poorer inhabitants whose majority were made up of the local agricultural worker.

XVIII Century:   Grandola was under the protection of the Dukes of Aveiro which then passed to the Dukes of Cadaval and the Marquises of Ferreira.

XIX Century:      Great change was to occur with a marked movement from agriculture and fishing to newer small industries such as mining and cork cultivation.

Present day Grandola the town is typical of the Alentejo in that it is set within the surrounding countryside of agricultural plains, fields of ageing cork and more recent eucalyptus and pine trees.

Grandola is extremely hot throughout the summer months with temperatures reaching 45 degrees celcius and as low as freezing point in the winter. Grandola is best known as the birthplace of the 1974 revolution which ousted the then fascist dictator Salazaar. Known as the Carnation Revolution it gained worldwide renown as a revolution that succeeded without the firing of any weaponry.

This Revolution is best remembered by the folk song written by Zéca Afonso in the 1960’s “Grandola, Vila Morena” which was his tribute to the comradeship and social conscience of the local working population, and was used as the command signal to commence the peaceful revolution on the eve of the legendary 25th of April by the Captains of the military who lead this bloodless coup d’état.

Grandola boasts some fifty five kilometres of incredible white sandy beaches which stretch from troiaresort at the tip of the Troia peninsula all the way down to Melides. These spectacular and often uninhabited beaches include Troia, Soltroia, Comporta, Brejos da Carregueira, Carvalhal, Pego, Aberta Nova, Pinheiro da Cruz, and Melides itself which has a wonderful  lagoon which channels through to the Atlantic Ocean.

The Sado estuary and surrounding areas are home to as many as two hundred different varieties of birds throughout the year and a plethora of fish and shellfish including sea bass, red mullet, cuttlefish and sole. The area boasts cork, oak, pear, orange and many other varieties of trees and shrubbery which are local habitat for many species of fauna.

Grandola and in fact all areas of the Alentejo in Portugal are known throughout the country as one of the best areas to be wined and dined with many arguing that the gastronomy here is the finest in all of Portugal. The  local production of quality wines is also undisputed and unrivalled anywhere.

The handicraft industry in and around Grandola includes many items produced for residents and visitors alike including wrought iron, weaving, tapestry, wooden furniture, pottery, cork and leather items and goods.

Grandola offers the visitor and resident a variety of different types of accommodation including the typical Portuguese Quinta set within the countryside to five star luxury hotels and even beachside camping sites. Grandola is undoubtedly one of the prettiest parts of Portugal and with the recent multi-million Euro investments within the local tourist industry and infrastructures, is sure to be one of the ‘hottest’ areas to visit and own property in Portugal. 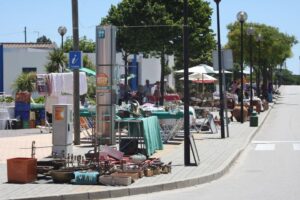 Carvalhal, Grandola, Setubal.
Carvalhal Portugal is a parish located within the municipality of Grandola which also incorporates both Comporta and Troia. Carvalhal the village is located just to the side of the Atlantic Ocean and grew up along with the local industries of agriculture, wood and tourism. Carvalhal boasts some of the most pristine beaches in Portugal, many of which have earned the Gold Standard award including Praia do Carvalhal and Praia do Pego. The parish of Carvalhal is probably most famous for its Roman ruins positioned along the Troia peninsula and today benefits from the local production of both rice and wines.
Carvalhal Village is approximately 3 kilometers from the beach and due to the expansion of the local tourist industry is now starting to benefit from the influx of the tourist Dollar. Carvalhal property prices are fair when compared with the luxury developments in Troia, however because of the limited availability of housing stock, prices are on the rise. Although limited, you can still find a number of properties that are in need of repair, however unless you are willing to meander through the halls of the planning department and hire local builders you may decide to opt for a newly constructed property first. 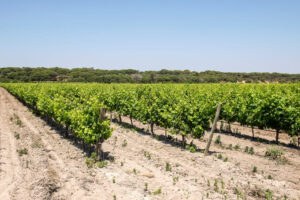 Muda, Grandola, Setubal.
Muda is a tiny hamlet that lies on the road between Carvalhal and Bicas on the way to Grandola. This little hamlet is made up of around 30 small houses and farm land and was once where the travellers exchanged their horses for their horse drawn carragies. When referring to Muda, nowadays, most people refer to the huge land mass behind this hamlet which houses some of the finest estates in the area.Muda is the most exclusive country estate area of Comporta and is actually closer to the elitist beach area of Pego than the much privileged area of Brejos da Carregueira de Baixo. Muda is the area where most people search for a large country estate and ever since the land was sub-divided by the Herdade da Comporta, Portugal in the late 1990’s early 2000’s property sales have boomed. In fact it is very difficult to find land here unless you are now prepared to open a company for agriculture or tourism.

Muda is also home to the much sought hotel Sublime Comporta, Portugal which after it’s initial success is now planning to expand its hotel rooms, services and country villas which will be for sale.

For further information or to access our offline properties!